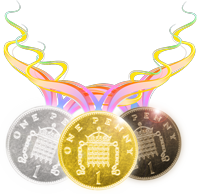 It is with great pleasure we announce the winners of the 2014 Pennies from Heaven Awards. Bronze medals are awarded to employers with more than 10% of staff participating in the scheme, Silver to those with over 15% and Gold to those with more than 20%. This year we have also given a Chairman’s Award to the employer we feel has gone the extra mile in terms of promoting the scheme.

“We are delighted to receive these awards and would like to go on supporting the Pennies from Heaven scheme for many years to come. It has made a great contribution to many good causes and provided a boost for many of our own charities.” John Fry, Chairman of Norfolk and Norwich University Hospitals NHS Foundation Trust.

The Pennies from Heaven Awards are given annually as a celebration of best practice and achievement in the running of the scheme. The Awards act to provide recognition for employers, employees and pensioners who have shown exemplary generosity, tenacity and achievement over the past twelve months. Although Pennies from Heaven is very simple to understand and set up it still requires dedication from the employer / pension provider to communicate its purpose and point and we hope the Awards accentuate and reward such effort.

2013 was again another year of continued growth in the membership of the Pennies from Heaven scheme with donations up 12% and the marking of a major milestone of distributing the 250,000,000th penny to charity. Participation rates have also improved by 50% in 2014 rising to an average of 15%. We launched sign up to the scheme for members via our website as well as launching Pennies from Heaven on Facebook and Twitter. Employers such as Ageas, Gloucestershire County Council, MerseyRail, National Grid and the Royal College of Nursing joined the scheme and I am delighted to advise that 2014 has already seen the start of 5 new schemes and we are in discussions with many more employers as I write.

“It’s a great achievement for LV= that the success of our scheme has been recognised and this shows that our pennies are making a big difference to the charities we support.” Clare Jackson, LV= Payroll Officer.

May we congratulate all of our Award winners on their achievement and thank them for their ongoing support and generosity. The donations given by all Pennies from Heaven members have made, and continue to make, significant differences across all 265+ benefiting charities. There can be little doubt that ‘small change is making a big change.’

A list of winners are below and we will shortly be providing more information on how they have achieved such results.