35% more employers win an Award and participation rates up 20%

It is with great pleasure that we announce the Pennies from Heaven 2015 Award winners. 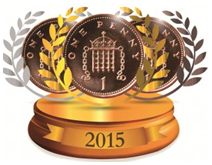 The Pennies from Heaven Awards are given every year to celebrate fundraising excellence. It is our way of endorsing organisations that not only support charitable giving in the workplace but do so exceptionally well. They are not just certificates to hang on the wall or logo’s to post on a website but a hard earned opportunity to tell staff and customers how great you are! Our winners have achieved something great and we hope by recognising this the Awards raise the profile of the scheme even further and encourage even more people to join in.

“The Pennies From Heaven scheme is a great way for organisations to make a regular charitable contribution. We’re extremely proud that so many of our staff have felt compelled to sign up to the scheme and to have raised just short of £20,000 in such a short period of time is fantastic! We’re sure that money will make a massive difference for the Liverpool Mulago Partnership.” Rachel London. Liverpool Women’s NHS Foundation Trust

The Chairman’s Award in 2015 has been awarded to Mencap who have demonstrated continued and growing support for the scheme. Having launched the scheme in 2010 Mencap has seen participation rates steadily climb from 16% in 2012 to 27% in 2014. Today 1 in 4 employees has signed up to Pennies from Heaven donating over £1,000 a month. In total the scheme has raised >£35,000.

“I am delighted Mencap has been chosen to receive both the Gold and the Chairman’s Award and proud to hear of the high numbers of Mencap colleagues who are taking part in the scheme. It’s great to know that by donating very small amounts from our salaries each month we have raised over £35,000.” Jan Tregelles, Chief Executive. Mencap

Of course the real winners are all of the charities that have benefited directly from all of the donations – they really do appreciate every single penny.

2014 was another incredible year for Pennies from Heaven. The scheme has seen a continued rise in its popularity with employees with the average participation rate rising to 18% (up 20% from 2014). Pennies from Heaven will give out more Awards than ever before up 30% from 2014. In the last 12 months employers such as EY, The Financial Ombudsman Service, National Oilwell Varco, Friends Life, RR Donnelley, UK Asset Resolution, Chelmsford City Council, NHS Gloucester CCG, Oxleas NHS Foundation Trust, The Rank Group and Solihull CCG have all joined the scheme. Sixty one new charities have also benefited from Pennies from Heaven donations for the first time.

“Not only is Pennies from Heaven unbelievably easy and effective to use, it makes a huge difference to all the dogs in our care. Every year Dogs Trust care for around 16,000 dogs so with the incredible donations given through Pennies from Heaven we can continue giving them all the love and care they need before finding their forever home.” Kirsty Scott. Dogs Trust

See all our lovely testimonials from Award winners here.

May we congratulate all of our winners on their achievements and thank you on behalf of all of us at Pennies from Heaven for your ongoing support. There can be little doubt that little pennies are making big changes.

“LV= is very proud to receive a Platinum award to show that the success of our scheme has been recognised.”
“This demonstrates that our pennies from payslips are making a big difference to the charities we support. It’s very simple for our employees to join the scheme and an easy way to donate to the charities nominated” Clare Jackson, LV= Payroll Officer.
.

“We’re really delighted that Warwickshire County Council staff are being given this fantastic award which provides much needed recognition for their valuable support to The Myton Hospices. The Pennies from Heaven scheme is such an easy and simple way for staff to support their chosen charity. We couldn’t continue to provide our services to the people of Coventry and Warwickshire without the support of the local community and organisations like Warwickshire County Council who have raised an incredible amount for Myton through such an effective way of giving.” Hannah Morris. Myton Hospices

None! Everyone went for Gold and achieved it!